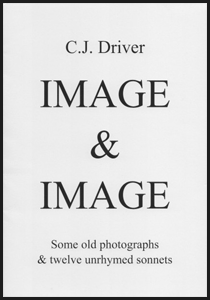 Memory works in uneven ways. Some events are recalled clearly while others are indistinct, rather like a weak broadband connection that offers only pixilation and buffering.

C J Driver’s pamphlet shows memory’s default setting of patchy delivery, via poems which look at his own life. The subtitle — Some old photographs & twelve unrhymed sonnets — sets up the idea of disjunction. There’s no promise of order (it’s ‘some’ photographs, not a curated collection) and ‘unrhymed’ sonnets (no comforting neat chimes).

Of course this appeals. I like poets who think about thinking and then how to show the reader how complex our minds are. Even better, as here, when there’s a wry humour threaded through the poems. Driver’s personal history and the more universal idea of how/what we remember come together, visibly.

The opening sonnet, ‘Himself’, sits under his two photographs —

He’s looking at himself, as if he were
That boy again. He stares back, sans smile,
A stripling still, a lanky, gangling boy

Haven’t we all done this — confronting an image of the younger self? Driver peers below the surface, behind the ‘mask’ the adult self has learned to wear, while moving between the photos of ‘now’ and ‘then’:

He keeps on … well, harsh to call it lying:
Dissembling might be fairer. Confessional
It’s not. He keeps his secrets to himself.

Probing the past brings up contradictions. For example, in ‘The prep school play’:

If you asked me how I liked that school,
I would have said I hated it.

Yet the accompanying photograph shows him as ‘tall, self-confident, / And smiling.’ Driver allows equal space to these shifting versions, letting them sit together.

He’s good, too, at replicating memory’s faltering movements by varying the sentence lengths and using short sentences, clipped to conversational patterns (as in ‘Who’s this?’, which is matched with a slightly blurred, blown-up image of a boy in what might be Fleet Air Arm uniform) —

Who’s this? Someone from school. Not sure. I guess
His name is buried somewhere there, down deep
Below the years’ detritus.

When an old schoolfriend supplies both the name of the forgotten boy, and the fact that he was a bully, hated by all, it only proves the message of the final lines: ‘I keep his face in mind — but why? / To learn that hatred doesn’t last that long.’

These are poems that think, and leave you thinking.