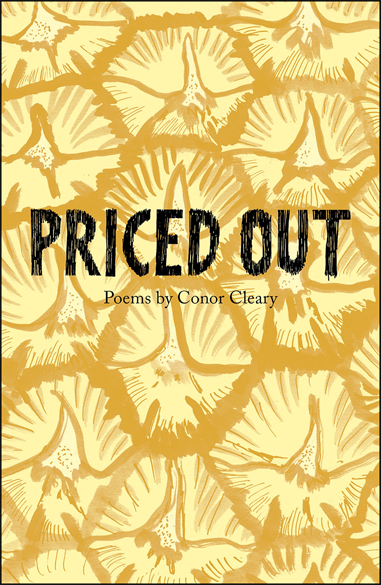 These are quietly angry poems. They seethe at the legacy of western materialism and late capitalism.

In ‘piña’, the poet uses the pineapple, with its historical associations of luxury, to expose the shallowness of a particular kind of rich lifestyle:

Although there’s no punctuation, precision lends force. That neat tricolon of ‘unsliced uneaten recycled’ highlights the selfishness and hollowness of using food only for grand display.

Later on, in the title sequence, Cleary’s excoriations feel more explicit, personal, and complex. Nostalgia for certain aspects of capitalism lurks behind his critique of the ‘fat promise’ of the nineties and the ‘cities you’ve been priced out of’:

I was born in the late 80s. I vividly remember the tactile delights of VHS and cassette technology. Objects had a realness about them which — in our increasingly digital world — today they simply don’t.

Priced Out acknowledges the psychological complications of a legacy of luxury. Ultimately, it’s a pamphlet that questions the inequalities and false appearances of our time.